The best is saved for last. My day 5 HF Roundtable Event Giveaway!

My family vine reaches back through thousands of years, through Kings and Emperor's, but one of my most fascinating ancestors is by far my 11th great grandmother Elizabeth Brooke born in Cobhamhall, Kent England 1503 the daughter of Thomas Brooke the 8th Earl of Cobhamhall. She married my 11th great grandfather Sir Thomas Wyatt the poet who was madly in love with Anne Boleyn and wrote sonnets for her. This is of course while he was married to Elizabeth. Thomas and Elizabeth had two children a daughter Anne and my 10th great grand father Sir Thomas Wyatt the rebel who led the rebellion against Queen Mary advocating to put Jane Gray back in power as queen. He was later executed with Jane's father Henry. 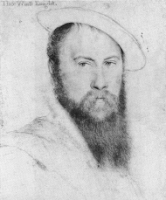 Wyatt picture will link you to previous post about Thomas Wyatt and his sonnet for Anne.
Elizabeth and Thomas had marital problems from the very beginning. I would largely suspect it had much to do with my great grandfathers roving eye, and love for Anne Boleyn. Thomas filed for a legal separation on the grounds of Elizabeth being "an adulteress" funny thing was that he could never produce any specific man that she was having an affair with. Nevertheless he kicked her out in 1537 forcing Elizabeth to live with her brother, Lord Cobham, refusing to pay support for his adulteress wife. Funny isn't it that he was still carrying on his affair with Elizabeth Darrell. In 1541 Wyatt was arrested and his properties all confiscated. The Brooke family took advantage of this state of affairs and forced a reconciliation as a condition of Wyatt's pardon. Apparently Lord Cobham had a lot of clout with King Henry. It doesn't appear that Elizabeth ever went back to her home with Thomas. He would die in 1542. It was early in 1542 that Lady Wyatt's (Elizabeth) name crops up in Spanish dispatches as one of the three ladies in whom Henry VIII was said to be interested as a possible sixth wife. Any candidate had to be a direct descendant of Edward III. Elizabeth had an impeccable pedigree one that was even more princely than the King. However after his 5th wife Catherine Howard it was of up most importance that the King marry himself a wife with a spotless reputation. The scandal surrounding Elizabeth and Thomas caused the King to look elsewhere. Thank goodness for small miracles!!!!
Following Wyatt's death Elizabeth would marry Edward Warner, Lord Lieutenant of the Tower. She died at the Tower in August 1560 and buried there within it's precincts. Elizabeth was Anne Boleyn's 2nd cousin, her grandmother would be Anne's Aunt. I have to wonder what she felt about Anne and her husbands attachment to her. Did she hate her? Was this the reason she found herself a lover? I do not believe that Thomas, her husband ever wrote any sonnets for her.
I love this woman, my great grandmother. What a life she led. She was right there in the middle of it all, married to one of Anne's lovers, cousin to the queen, losing her son on the Tower Green.
According to Kelly Hart in her book Mistress's of Henry VIII she is listed as one of his short term mistresses. The portrait shown here is a drawing by Hans Holbein the Younger labeled " Anna Bollein Queen", his only portrait of a woman in informal dress has been long argued to actually be Elizabeth Brooke, Lady Wyatt. Who knows, but it could be.
In honor of my great grand mother Elizabeth Brooke I am offering a give away of Henry VIII The Early Tudors 12 4x6 portrait postcards and booklet put out by London's National Gallery, purchased at Hampton Court (Anne's home while married to Henry). It's a beautiful set. The portrait cards are gorgeous and frame-able. They come in a lovely case included with it is a 12 page booklet with explanations on all the portraits. The pictures here do not do justice.
This contest will run until midnight October 2nd.
Rules: 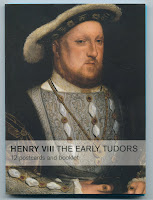 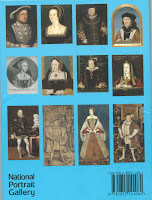 back of the case showing the portraits included