Book Review of The Secrets of the Tudor Court by D.L. Bogdon... 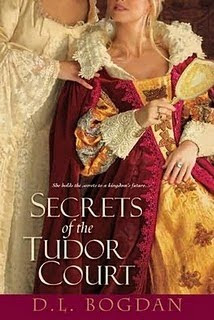 I have been ignoring my blogging responsibilities lately due to some health issues, but I am feeling better and part of the reason is because of this book.
A couple of weeks ago I did a very clumsy thing and fell at work on my way to the Ladies room. Of all things my non-slip sandal actually got stuck on the floor and I just kept going falling face forward and hitting my chest on the door frame on my way down landing on both knees. Unfortunately I was alone in the office and it scared me to death. I couldn't get up for awhile. When I did I turned off my computer, locked the doors and went home crying my head off. It hurt like crazy. I managed to get ice on everything, get in bed and grab a book. The book I grabbed off the shelf was none other than The Secrets of the Tudor Court. To tell the truth I wasn't planning on too much because this is the author's debut novel , etc. Was I in for a surprise!!!! From the first page it got me. I love the Tudor era. It seems to be never ending. Always some intrigue or new character that hasn't yet been explored. This book doesn't disappoint.

Mary Howard the daughter of Thomas Howard the 3rd Duke of Norfolk is our lovely protagonist who grows up in the Tudor Court beginning with being a young lady-in-waiting to Anne Boleyn. She is there through it all, the banishment of Catherine of Aragon. The rise and fall of Anne Boleyn. Anne of Cleve's divorce. The execution of her young sweet cousin Katherine Howard, and Catherine Parr's gentle care of King Henry in his final years. Mary marries the King's bastard son Henry FitzRoy and is not allowed to consummate the marriage. FitzRoy will die young never having made Mary his actual wife. She will be left destitute and have to fight for her rightful inheritance from her husband. She is used as a pawn by her scheming, ambitious father the Duke of Norfolk. She witness's her mother being abused by her father and she will know first hand betrayal, neglect and violence at her father's hand. Through all of this Mary maintains her dignity and, unbelievable as it sounds, her love and duty towards her father. She was the best contribution he ever made to this world, and in the end one would hope he realized this.
The author weaves an amazing story depicting their love/ hate relationship. The book is full of richly developed characters and plots. You might say the book could have been titled Yet Another Howard in The Tudor Court or the Tudor era could actually have been the Howard era. There were so many Howard's compared to Tudors. The Tudors were not prolific, but my word there were, and still Howard's coming out of the wood work. My goodness Katherine Howard was one of 10 children, the Duke himself was one of many as well. There are a lot of Howard descendants around including me. I never knew anything really about the Duke of Norfolk's immediate family. Somehow I could never imagine him having a wife and children. It was very interesting finding out about Mary and her brother the Earl of Surrey both of which were played by their father to meet his ambitions.
This book is well worth the purchase. You will not be disappointed. It will move you, it did me.
Ms. Bogdon is a talented author and this being her debut novel is amazing. I really look forward to her other books that will surely follow.

Book Review of The Confessions of Catherine DE Medici by C.W. Gortner... 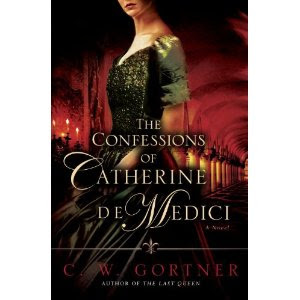 It gives me great pleasure to review this outstanding book by the talented author C.W. Gortner author of The Last Queen and The Secret Lion.

Catherine is the last heir of the De Medici Dynasty of Italy in the 16th century. Her uncle is the infamous Pope Clement. Her childhood is controlled by her extended family. She is placed in a convent by her families adversaries. She witnesses the sacking of Rome by Charles the Emperor of Spain and sees things no child should ever have to witness.

She like most princesses is used as a political pawn in marriage. She is betrothed to Henri the son of Francois I of France and packed off to Paris where she will marry Henri whose life mission appears to be humiliating his new wife. He barely shows up for the wedding and has no mercy for her on their wedding night where it's slam, bam, thank-you mam and then he leaves to spend his honeymoon night with his mistress Diane le Poithers. In the beginning Catherine appears to be very timid and certainly not the Madame Serpent she is later refereed to as. Her husband is repulsed by the fact that she comes from mercantile heritage and not a true blue blood. In France according to her father-in-law Francois I pedigree is everything. It is finally made clear to Henri by his father that he has obligation to provide an heir for the kingdom, so he and Catherine finally get down to business with Diane le Poither's assistance and provide France with an heir, Francois II who is swept up by Diane and supervised by her in the royal nursery. Catherine and Henry will go on to have several children 4 of them being sons who will all at one time or another rule France. Catherine is bitter about sharing her husband with his mistress, but in time she will develop with Henri a loving relationship.

She will go onto rule France through her sons after her husband's death. She is determined to keep the kingdom in tack and Catholic. The world is turning upside down with religion. Holy wars are in abundance. In particular in France with the Huguenot's a Protestant faction that is ever threatening to over throw the crown. Catherine will seek drastic measures to assure that the crown remains in her family. St. Bartholomew's massacre of the Huguenots will be one horrible event that will earn her the title of Madame Serpent. Much has already been said about her association with the famed physic Notrotdamus so I will not be covering that here.

On page 321 of the book is a great summation of her life I would like to share.
Left alone I sank into my chair. I did not think. I simply put my face in my hands and wept as I hadn't in years. I mourned a thousand losses:for the child I'd been and the family I'd left behind, for the country I barely recalled anymore and country I now fought to save. I wept for my dead children and my living ones, who'd grown up infected by the poisonous hatred of our religious wars. I wept for my friends and my enemies;for all the lost hopes and illusions. But most of all, I wept for myself and the woman I had become.

Mr. Gortner tells a great story. This book is written in first person which is my favorite. I was captivated from the beginning to the end. The author really knows women , and how they express themselves and their feelings. I was amazed, it's not everyday a man can portray women so well.
I can tell you now that I will be reading The Last Queen and The Secret Lion soon. I would like to express my thanks to Mr. Gortner and HFBRT for the opportunity to review this book.

Upcoming HFBRT Event for May...

This is such an exciting new book. I have never read Mr. Gortner before and I will say I am very impressed! I really enjoyed this book and will doing a review as well as a creative post for this event. Make sure your check out HFBRT for the schedule. It will be interesting for sure. My review is scheduled for Saturday May 15th.
Posted by Tudor Daughter at 3:36 PM 2 comments:

The Power of Motivation to spruce up the old... 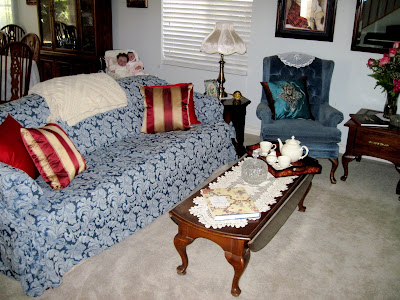 I love my home, I truly do, but lately(like the last 4 years) I have been totally unmotivated to do anything new to spruce it up. In my younger years I loved decorating, now I love blogging and making dolls. My standards beyond cleanliness has been in a rut. What could get me more motivated than hearing that my dear friend of 34 years is coming to visit with her husband? Motivated, more like complete panic. The last time she visited was my son's wedding 11 years ago. I don't think anything has really changed in 11 years.

I just couldn't have her see the rut I'm in, so my daughter and I sat down and made a list of what need changing and began making plans. We realized it was going to take some investment. We didn't want to spend a great deal, like a whole new room of furniture, we knew we had to be economical. We both love English decorating, we wanted something in between English country and formal. We began with a major declutter. We made a place for our doll making supplies to be hidden out of the way instead of in the dining room 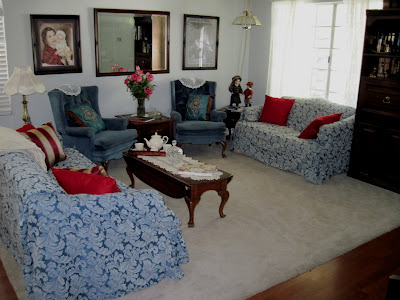 . We bought slip covers for the old couch and love seat.
I bought a whole bunch of accent pillows at Wal-mart to bring out the color in the wood and art work. We spent a lot of time in Ross and Marshalls and was able to pick up some fun decorating pieces such as table frames, tea trays, table cloths and pictures. We are both doll collectors/makers, but nothing looks worse than going into a home that is just overwhelming with dusty dolls. 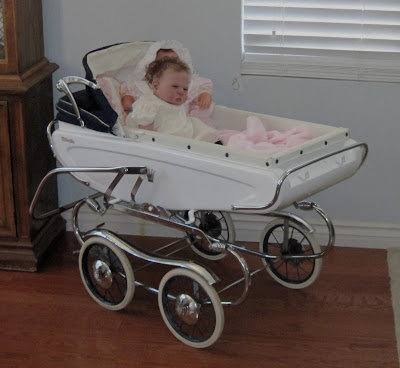 My daughter found a vintage pram off of Craig's list for $150 in perfect condition. We chose one doll each that would compliment the room and have them in the pram. We completely redid the upstairs bathroom. I will have to show picture of that later. By the time we were finished it just looked beautiful. It was exactly what we were trying to achieve. All in all we figure we spent about $600 which is very reasonable for a makeover.
I wish I had before pictures, but I am sharing some quick pictures I took this morning on my way to work.

My friends were very impressed and when we were out shopping yesterday she found a Feltman Bros. vintage infant dress for one of my pram dolls. I love going home now and walking in my front door! I would love to hear how you have made over your home. It's fun to share ideas. 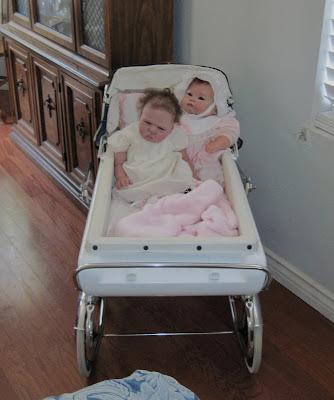 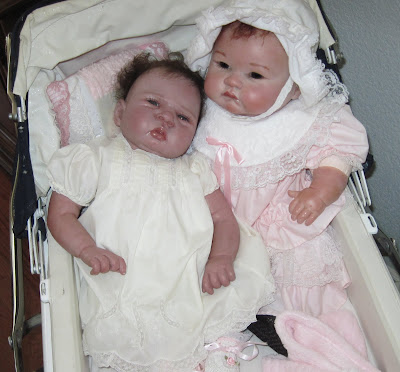