In the Garden of Beasts Book Review 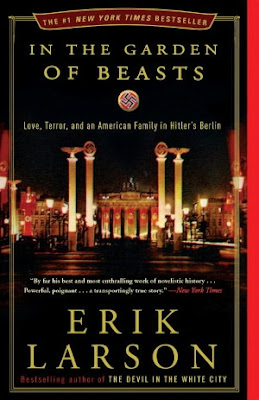 This week I'm featuring a book I just finished by Erik Larson: In the Garden of Beasts. Love, Terror, and an American Family in Hitler's Berlin.
I received this book for a Mother's Day gift from my daughter Katie. It's a long standing joke in our home of my love/hate relationship with the Nazi's. I hate them, but I love to read about them. Go figure. It seems I'm not alone in this, there has been countless books written on the subject of WWII Germany, Hitler and Nazi's in general. I think the reason for the fascination is  because it's so hard to believe that a country of 65 million civilized people could descend into such evil. We WWII buffs are always searching for the answer, something clear and reasonable, but there isn't any justification it, was sheer evil it it's greatest form.

Just when you think you have heard the worse or the more fantastic the Nazi's could be, you are always surprised, there is always new information. In the Garden of Beasts does not disappoint. I have always wondered about Germany in the early 30's when Hitler just became Chancellor, and the Nazi party was getting a foothold. How fascinating this case study is!!! 1933 a turning point in history. Hitler and his goons are manipulating through fear, terror and propaganda the German people and the world looks on in shock sure that this will pass and Germany will settle down. It's only been thirteen years since the Great War and the devastation of France. Europe is in economic disaster and the United States is advocating isolationism, they have their own problems with the Great Depression and Europe always seems to be in trouble. Let's let them figure this out with-out us.

The world as a whole seems to be out of a job and starving yet the League of Nations ambassadors to various countries are spending lavish amounts of money trying to impress their host countries. It's all one big party for the politicians. American ambassadors were not chosen for their knowledge of current affairs or ability to represent their country's agenda, but for their ability to pay for lavish parties, homes and cars. That is why William H. Dodd being chosen by Roosevelt to go to Berlin as the American Ambassador in 1933 was so extraordinary.

Dodd was neither rich or flamboyant. He drove an old Buick and taught history at the University of Chicago. He was a shy person and disliked the lime light. He and his wife were home bodies that hardly ever entertained. His greatest pleasure was going to his farm in Virginia and working on his manuscript The Old South. Why then was he chosen to go to the most pivotal European city, Berlin and represent the United States?  Can he make a difference in the United States attitude towards isolationism? Will he be able to convince the Pretty Boys Clubback home that Hitler is a maniac and lier?

Oh the fun you will have reading this book. Buckle up and be ready for a fast, scary ride through history. There are parts where you will be screaming WHY, WHY, WHY didn't they listen. You will experience first hand what it was like to be a German citizen with an opinion opposite that of the REICH.

Once you have read this you will want to read all of Best Selling Author Erik Larsen's books. Fanatistic.