The Lady of Hay by Barbara Erskine. I bought this book at Waterstone's in Winchester, England on my trip. I have wanted to read this for quite awhile as was unable to find a copy. Waterstone's Books in England has so much we do not have as far as Royal fiction and non. I was really excited to come by several of Barbara Erskine's early works in brand new covers. I bought Lady of Hay and Child of the Phoenix.
I have never read anything by Erskine before, but now I'm converted. She's a wonderful author. I started the book at 10 p.m. the night before we left for home and didn't put it down until 1:30 a.m. You know it's good when I can actually stay awake that late. I just have not been able to put this book down. It's 725 pages, but what a story about reincarnation and redemption.
Joanna Clifford a young University student in Edinburgh volunteers to be hypnotized in a regression project for two professors. She is excited about this new age trend. She regresses all the way back to the late 12th century as Matilda De Brasoe the wife of the Marcher Baron of Abergavnney Wales, William De Brasoe. Her regression is so traumatic that the professors feel compelled to have her forget all about it. When she wakes up she is convinced that she was unable to be hypnotized, and has no memory of Matilda.
Flash forward 15 years and Joanna Clifford is a very successful journalist for a Woman's magazine. She loves interesting projects to report on. She has a nice car, nice flat and very handsome boyfriend who she is on and off with. An interest in reincarnation and regression by the public has given Jo an opportunity to volunteer herself to do a major story on it.
She is very sceptical about the subject and is out to prove that it's all just a hoax or in your mind. She is regressed back to being Matilda again and it's all so amazing that everyone involved is interested in Matilda's story so Jo keeps going back to be regressed, and the story becomes more and more complex not only involving her past life, but affecting her present life as well. Matilda had three men in her life that were madly in love with her, her husband (a creep), her lover ( a coward), and her King ( a maniac). The regressions start taking a major toll on her emotional well being as well as physical. Jo begins to realise that these three men have followed her 800 years into the present day to settle their own scores with her, each other, and themselves.
What a literary ride this book is. You won't be able to put it down!!!! I am now very anxious to read Erskine's Child of the Phoenix. Look on Amazon for used copies if you cannot find a new one or Ebay. It's worth finding and reading. 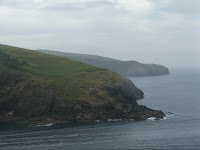 I finally got all my pictures together of my trip. So many it's overwhelming so I have divided them into albums. Today is Cornwall.

Visiting Cornwall was a favorite of mine. It is absolutely breath taking and very mysterious! This is Daphne Du Mauier country. There is even an actual coaching inn The Jamaica Inn on the Bodmin moor. You can see the smuggler's caves in the cliffs.
Cornwall is located in southwestern tip of England. It is very rural, but so beautiful. We stayed there two nights in Boscastle and from there visited Tintigel and Port Isaac. Port Isaac was my favorite. While we were there they were filming an episode of Doc Martin, a BBC mini series. We saw the cast and watched them film in this small little seaside village. I have seen the 1st season of Doc Martin and loved it. I can't wait for season two to be available in the United States.
Saving Grace was also filmed in Port Isaac's. There is a definite feeling of mystery in Cornwall which adds to it's charm. I loved the people they were all so friendly.
The link below is to my photobucket album of Cornwall~Enjoy!
http://s245.photobucket.com/albums/gg58/susiefio/Cornwall/?albumview=slideshow
Posted by Tudor Daughter at 10:35 AM 6 comments:

O.K. this is a goody! I am giving away a hardback edition of Legacy by Susan Kay pub. in 1985. Winner of Historical Fiction in Memory of Georgette Heyer 1985 award and the Betty Trask Prize. It is currently out of print and difficult to find. This is one of my all time favorite books about Elizabeth I. It took Susan Kay fifteen years to complete this book. This is a must for any serious Tudor buff's library.
Publisher's Weekly: Kay's prodigious research buttresses this robust historical romance, winner of Britain's Georgette Heyer Historical Novel Prize and the Betty Trask Prize for a first novel. England's greatest Queen is presented from an intriguing psychological viewpointElizabeth I's need for men and the bondage endured by those she chose. Freely mixing the verifiable with the imagined, Kay traces Elizabeth's rise from lonely childhood to lonely eminence. In the person of Robert Dudley, later Leicester, she creates a romantic fulcrum for Elizabeth's womanliness, delineating the childhood affection for Dudley that flowered in clandestine liaison and may be the closest Elizabeth came to a loving relationship. All of the Court's intriguing personnelfrom the ubiquitous, conniving Cecils to the presumptive upstart, Essexare drawn with care; the turbulence of the period, filled with violent deaths, challenges from abroad, pragmatic liaisons, is conveyed with verisimilitude; the rich tapesty of the Tudor ascendancy is woven with colorful threads. It is, however, the depiction of a woman of whom "half the wives of England were jealous" that lingers. Literary Guild main selection.

1. International bloggers welcome, not limited to just U.S. and Canada
2. Must be 18 or over
3. For one entry leave a comment with email address
4. For two entries become a follower, if you already are please indicate.
5. For three entries post this giveaway on your blog.
6. Contest open until July 31, 2009

Return of the Native... 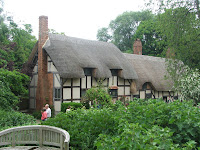 I'm back from our trip to England. It was a long trip back and I'm trying to adjust again to my time zone. Having some major jet lag!
We had a great time. It was just not stop. There was so much to see and we still didn't see everything we wanted to, but the highlights were the Tower of London, Kennsignton Palace, Hampton Court, Windsor Castle, Stafford upon Avon, Oxford University, The Cotswold's, Bath, South Wales, Cornwall, Jane Austen's home, Hever Castle, Winchester, Canterbury and the White Cliffs of Dover.
Henry VIII 500 Jubilee was in full swing. Everything was Henry VIII all over London and South England.
I have so many pictures and trivia to share, I just have to collect everything from both of our cameras.
Picture for today is of Anne Hathaway's Cottage~the wife of William Shakespeare. What a beautiful cottage dating back to 17th century. The cottage and grounds were just fabulous. The National Trust does a wonderful job of restoring and maintaining the historical buildings of the England.